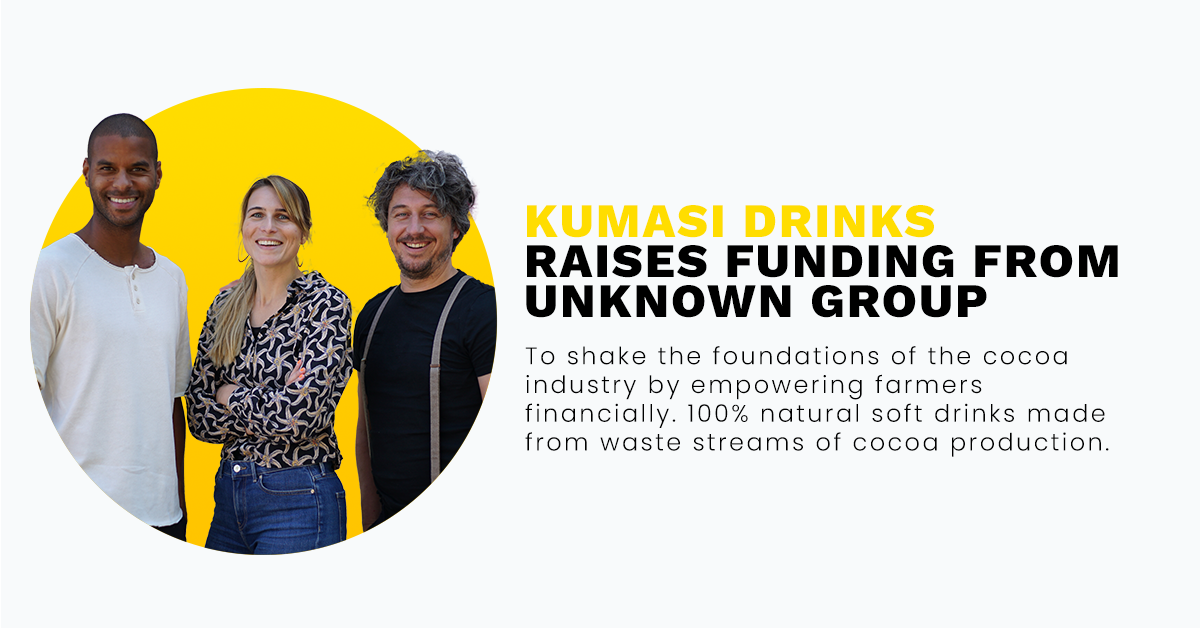 Unknown founders Edward de Jager and Hendrik Halbe invest in Kumasi Drinks through Impact Tech Ventures. Based in Amsterdam, Kumasi Drinks has created a range of 100% natural soft drinks from cocoa juice, a waste stream from the cocoa production process.

Key to our vision for the future of food is fueling founders that are working on bold and unconventional solutions that challenge the status quo, optimally use excess streams from production and empower producers. We’re proud to share that Unknown has completed an investment in Netherlands-based Kumasi Drinks, a company that ticks all these boxes.

Lars Gierveld, Co-founder of Kumasi Drinks said: “Investing in an early stage startup in a market dominated by major players is a bold move. Unknown believes in our ability to change the status quo of the cocoa industry. We’re thrilled to have a professional investor with a global reach and emphasis on impact measurement like Unknown join the Kumasi movement!”

We’re fueling Kumasi because they think outside the bean, in a cocoa industry that for too long has gotten away with exploiting farmers and dictating the market. With the excess cocoa juice, Kumasi Drinks creates a range of 100% natural, healthy and tasty drinks out of what was previously considered waste from the cocoa production process. The cocoa industry is solely interested in the seeds of the cocoa plant (cocoa beans), which are used to make chocolate. As it turns out, the juicy fruit pulp surrounding the cocoa bean is healthy and extraordinarily tasty. It doesn’t taste like cocoa or chocolate but like a kind of mix of lychee, mango and white peach.

With their fresh, novel approach in a cocoa market dominated by major players, Kumasi buys its juice with its technical partner in Ghana directly from farmers. This way, the cocoa farmers receive immediate additional income – up to 30% extra per kg – from selling the pulp and juice byproducts from their cocoa production process they would have typically thrown away.

Unknown Group Chairman, Edward de Jager said: “We’re proud to welcome Kumasi Drinks to the Unknown portfolio. In a short amount of time, Lars, Linda and Rogier have gotten a lot of traction with Kumasi Drinks with a bold idea – that they can empower cacao farmers by creating incredible products from excess streams – and their focus and emphasis on measuring their impact”.

Founded in 2021 by Lars Gierveld, Linda Klunder and Rogier Power, the seed for Kumasi Drinks was sown in 2018 when Gierveld, a TV presenter, traveled to the Ashanti region of Ghana to make a documentary about the cocoa industry (watch the English version here!). Here, he was encountered by a grim reality: most farmers are totally dependent on the sale of cocoa and they live below the poverty line. The industry is dominated by a few large players, who dictate the terms of the market. Middlemen at various levels of the supply chain ensure that the farmers get only a fraction of their profits. With the goal of flipping this status quo, Kumasi Drinks was born. They started collecting cocoa fruit juice with a group of farmers near Kumasi (which incidentally, is the capital of the Ashanti region in Ghana).

First hitting the shelves in January 2021, Kumasi Drinks – in less than two years – are available in over 1000 locations in The Netherlands, Germany, France, Italy and Spain. In their main base, The Netherlands, Kumasi have struck deals with the largest chain of supermarkets – Albert Heijn – and department stores – Hema to have their range of drinks on their shelves. “Retailers today are trying to make their catalog more in line with the values and mindset of their customers. Since we launched, we’ve been contacted regularly by retailers that want to put a drink that is good for you and good for the planet on their shelves”, adds Co-Founder, Rogier Power.

With this investment, Kumasi’s plan is to expand its audience by growing internationally and developing more products that are true to the Kumasi ethos (“We are exploding with ideas on how we can help more farmers and expand our product line”, quips Powers).

Kumasi will also set up a specialty drinks bar at Unknown Group’s new innovation hub ‘Titaan’ at the Binckhorst in The Hague. Opening in early 2023, Titaan will be a state-of-the-art 13,000 m² innovation hub to house startups and scale-ups that are creating a better world. A continuation of Unknown Group’s continual commitment to establish The Hague as Europe’s leading impact city, following the previous successes of Unknown’s global startup competition, Get in the Ring’s events in The Hague, as well as previous and upcoming editions of ImpactFest, Europe’s largest impact meetup.

This investment was done through Impact Tech Ventures, an investment fund that has received the Seed Capital facility of the Netherlands Enterprise Agency, de Rijksdienst voor Ondernemend Nederland (“RvO”). RvO is a government agency that operates under the supervision of the Dutch Ministry of Economic Affairs and Climate Policy.

Unknown is thrilled to welcome Kumasi to the portfolio and is eager to work with their team to bring their incredible product and exponential impact to more markets worldwide.

The Venture Engine® for open innovation