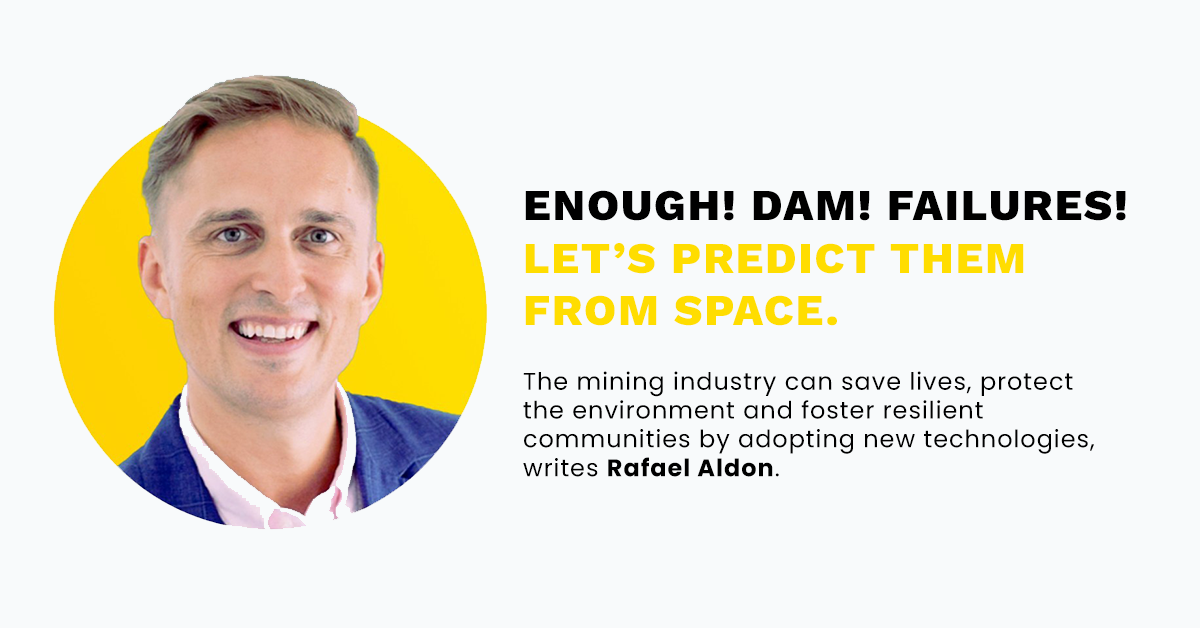 The world needs mines. In fact, it will soon need a lot more mines; our transition to net-zero depends on them.

The BBC recently calculated that changing the 31.5m combustion-engined cars in the UK to electric would require twice the current global annual production of cobalt and three-quarters of the world production of lithium, alone.

The tech hardware needed to decouple our fossil-fuel dependency, in the near term, will create demand for far greater mining activity that frequently comes along with toxic and dangerous Tailings Dams.

Tailings dams are among the biggest engineered structures on earth and contain waste material from copper, gold, uranium, or other ore mining (‘tailings’). Mineral ore mining generates tonnes of waste slurry, much of it toxic and the dam walls are the only barrier to nasty slime coursing into rivers, forests, or human settlements. To add to the hazard, the height of a tailings dam is typically raised throughout the life of the mine, as miners dig deeper into the site for ore.

A Catalogue of Catastrophe

Aside from the fact that these structures are on the landscape forevermore, Tailings Dam’s have a nasty habit of suddenly failing, and have been responsible for some of the most devastating man-made disasters in the last few decades.

The collapse of the Brumadinho dam in 2019 was a chilling reminder of the loss of lives as well as ecological destruction that a vulnerable tailings dam can result in. A structural weakness in a Vale SA-owned tailings dam gave in, releasing 12 million cubic meters of iron waste into the Paraopeba River in Brazil (enough iron waste to completely fill Wembley Stadium over three times).

270 people died, a further 11 missing are assumed dead. As a result, one-third of the Brumadinho river has been pronounced ‘dead’, a major problem as it supplied a third of the water to Greater Belo Horizonte, Brazil’s third most densely populated region. But this is not a one-off.

Just over three years prior to Brumadinho, the catastrophic Samarco Dam disaster became the largest recorded tailings contamination – 43.7 million cubic metres, (enough to fill up Wembley eleven times over). Tailings from the Fundão and Germano dams, which incidentally were also operated by Vale, flowed into the Voce river, polluting 668 kilometres of watercourses, displacing hundreds and killing 19 people.

Reportage and public information around tailing dams are sketchy at best because of governmental and organizational reluctance to acknowledge their very existence. A 2021 report estimates that between 29,000 – 35,000 tailings dams exist globally. 8000 of these exist in China alone. Annually between 2 and 5 “major” tailings dams failures are predicted to occur, along with 35 “minor” failures.

“Without major changes to law, regulation, and to industry practices, as well as without new technology that substantially reduces risk and increases loss control, our current prediction is for 19 very serious failures between 2018 and 2027,” – researchers at World Mine Tailings Failures (WMTF) [source]

The fact that experts are anticipating scores of very serious failures in the future, highlights a significant failure in our ability to properly regulate and monitor this infrastructure.  In both cases above, the dams had passed structural surveys prior to failing.

All stakeholders, from financial backers, (re)insurers, mining operators and governments/regulators need transparency of potential tailings dam issues earlier to prevent loss of life, billions in economic damages and the immeasurable loss of ecology resulting from tailings dams failures like the one in Brumadinho.

Recent findings have shown these events can be premeditated and avoided by embracing new techniques that could be ground-breaking when it comes to breaking ground.

Monitoring infrastructure from space is now affordable, globally feasible and from where I see it, absolutely necessary to consign tailings dams failures to the past.

The effectiveness of monitoring ground movements around the Brumadinho Dam was proved retrospectively in a recent study published in Nature by the University of Nottingham and Durham University. The lead author of the study, Dr. Stephen Grebby concluded that by employing algorithms and risk modelling-

“The failure date could have been predicted to within a week of it happening. Crucially, this prediction would have been possible around 40 days prior to the collapse, allowing time for a warning to be raised that the dam was becoming unstable.” 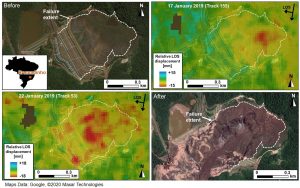 The top left and the bottom right images are satellite shots of the Brumadinho tailings dam taken before and after the collapse on 25 January 2019. The top right and bottom left show precursory movement across the dam (red and yellow colors), which the researchers analyzed to find that the collapse could have been predicted. (Image courtesy of the University of Nottingham).

At Unknown Group, we’re working to help scale innovative companies that could play a significant role in making tailings dams catastrophes a thing of the past.

Two of our portfolio companies, Geospatial Insight and Terra Motion, collaborating alongside the University of Nottingham have launched MotionMonitor-TFS. A turnkey solution that has the potential to consign tailing dam failures to the history books.

The Motion Monitor-TFS is designed to track ground movements in and around mine tailings facilities to provide early warnings of any potential structural failure. To put it in their words:

“Identifying potential failure, at an early stage, will enable companies to implement damage limitation strategies and, where appropriate, action to prevent failure can be launched minimizing the financial and environmental fallout.”

And because of the ubiquity of remote sensing satellites, this is a truly global offering that can be delivered at high frequency and affordably.

Governments and corporations have a responsibility to spearhead the drive for monitoring modernization – they owe it to their communities and the ecology the mines depend on.

A greener future relies on innovative tech hardware from solar arrays, turbines, electric vehicles, and billions of batteries. It’s time the same level of innovation and technology was embraced by stakeholders who are providing the raw materials for this revolution.

I’m energized by working with exceptional tech startups taking on big environmental and social challenges. Space-enabled tech has become easier, cheaper, globally feasible and the best part is that companies don’t need to be experts to take full advantage of its power. They just have to want to.

Unknown’s Venture Engine approach of creating networks of industry leaders alongside a pool of validated solutions and their founders to make tangible change in specific domains.